Hey everyone!  This week’s recipe is a copycat of a popular veganized bar favorite, buffalo wings!  The original Buffalo-Style Cauliflower “Wings” can be found at the hipster bar, Mohawk Bend, in LA.  I have never personally been to Mohawk Bend… I keep missing out on every opportunity!  However, Eric went with a friend since it is very close to where he grew up.  It was a vacant movie theater and home to many squatters for as long as he could remember, but it has since been revived into a cool pub.  Their food and drinks are made mostly with California-based products and their website boasts a menu for everyone – offering “vegan, vegetarian, and non-vegan options.”  I really want to swing by on a Monday for their three course meatless Monday meal.

Ever since their visit to Mohawk Bend, Eric’s friend was dying to try out some buffalo-style cauliflower “wings”.  After finding a recipe on pinterest (originally posted here), I have tried it out a few times and am ready to give you a full report.  I altered the recipe a bit, mainly so that it would result in more, and a little thinner, batter to more easily fully coat the cauliflower pieces.  I ended up with a little too much batter and a little too much buffalo sauce, but I thought it was worth it to make it easy to evenly coat every piece in comparison to the time I followed the recipe exactly.  They turned out deliciously crispy on the outside, but soft on the inside. 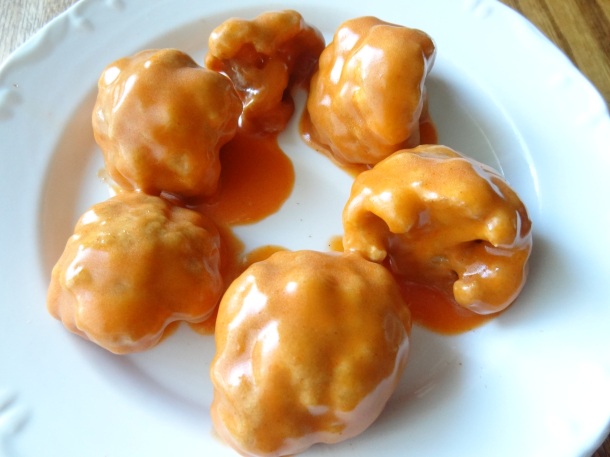 The original blog post also has a recipe for Vegan Blue Cheese Dressing, which I did not try.  If you’re interested, follow the link found here.

Here’s a peak at the “wings” before they were tossed in the buffalo sauce mixture.  You could potentially toss them in other sauces to make teriyaki “wings” and other fun appetizers. 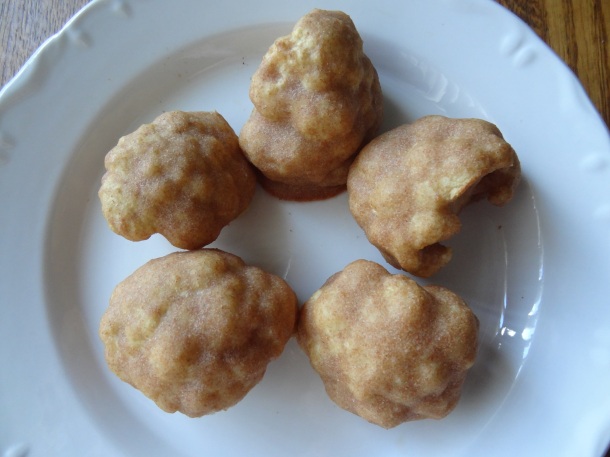 I blog to document my experience transitioning to a vegan lifestyle.
View all posts by mrsnikkiv »
← Vegan Recipe – Easy Vegan Brownies
Vegan at California Pizza Kitchen →