So, it has been a really long time since I have posted.  During my pregnancy, I just overwhelmingly didn’t feel like posting anything.  Now, of course, with a 4 month old, I have very little time to write anything.  In the beginning, I was sleeping while she slept, like everyone suggests, but these days I try to get stuff done or get ready for work while she’s sleeping.  While she’s awake, though, I want nothing more than to stare at her little beautiful face and blow raspberries on her little baby belly.  She’s such a doll and I’m so happy to have her in my life.  She’s got such a personality and is generally a very, very happy and very perceptive baby.  We are really very lucky. 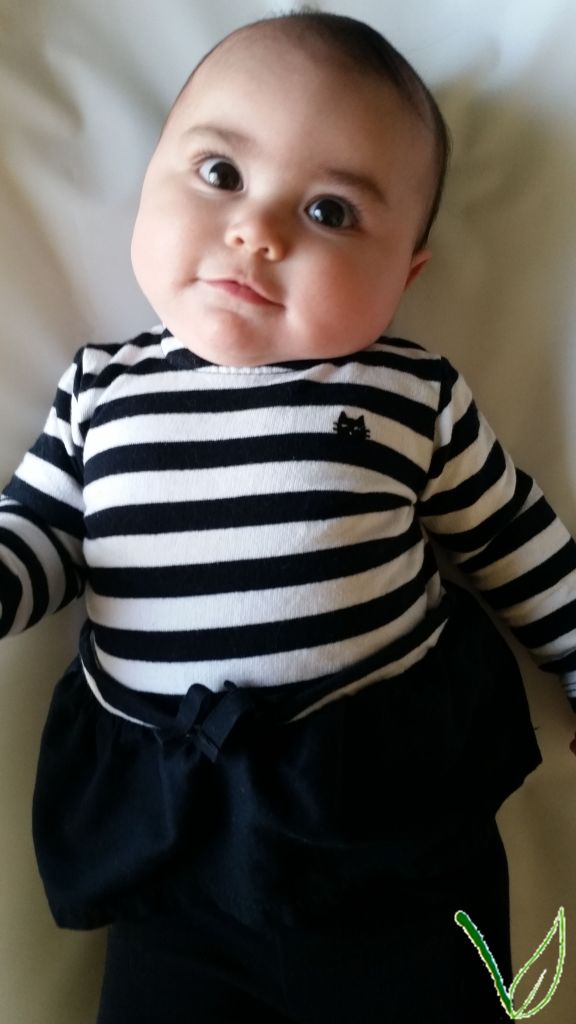 I happen to have this week off (my office is closed), so I thought I would try to get my momentum back.

I made this Oh She Glows Chilled Dark Chocolate Pie for this past Thanksgiving and it was so popular with my family that it was requested I make it again for Christmas.  Luckily for me, it’s pretty simple, especially with a tweak for the lazy.  I simply got store-bought pie crust from the frozen section (they came two to a package – more pie!) rather than making my own.  This pie is very likely the best vegan dessert I have ever had, let alone made myself!  Don’t let the coconut cream scare you away if you aren’t a huge coconut fan.  It’s not the overwhelming flavor of the dessert – that would be yummy, yummy chocolate. 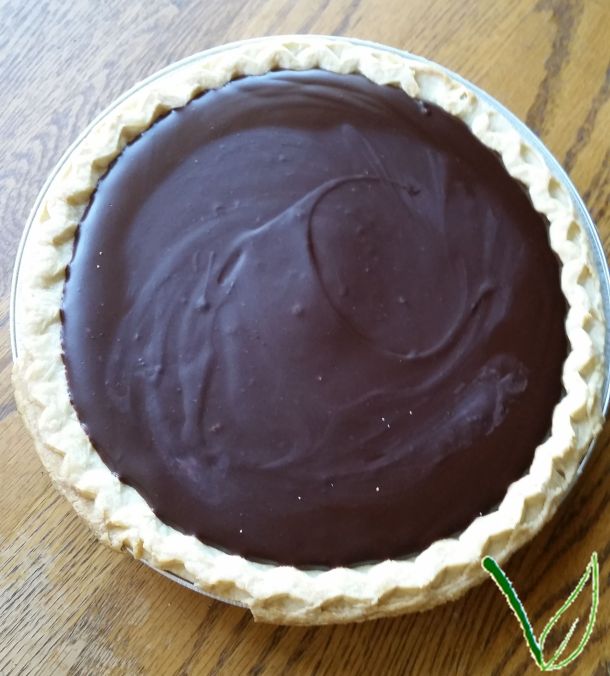 Rather than make the strawberry vanilla compote from the Oh She Glows website that I’m sure is delicious, I felt that a cranberry-raspberry compote would be more fitting for the season.  I did a quick google search, then chose a recipe that looked the easiest (that’s usually how I work) and ended up with this one originally from Bon Appetit.  I would make this 100 times over – it was that good.

My mom has been experimenting with different vegan ice cream and cheese recipes lately and, man, are we lucky to be her taste testers.  On Labor Day, she served up some Chocolate Vegan Ice Cream, adapted from the cookbook, The Vegan Scoop: 150 Recipes for Dairy-Free Ice Cream that Tastes Better Than the “Real” Thing by Wheeler Del Toro.  It was the best vegan ice cream I have ever had.  I definitely recommend giving it a try. 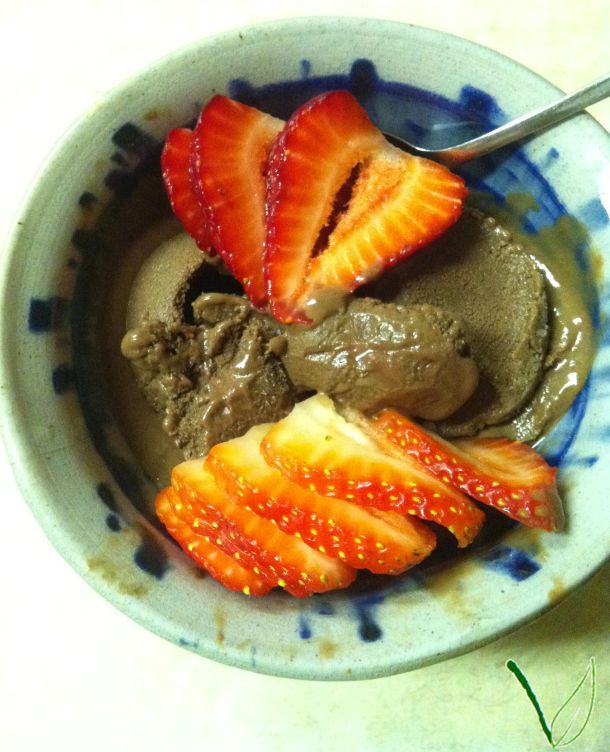 This semester I actually had a final on a Saturday, Mother’s Day weekend.  While that sucked, I planned to hang out with my mom for the afternoon afterward.  We went to lunch at Vegetable Delight in Granada Hills.  The restaurant is entirely vegetarian and mostly vegan, with an extensive menu.

Every time I have been there, it has been mostly empty, but the people that do go there really like it.  They have great reviews on yelp, happy cow, and urban spoon. 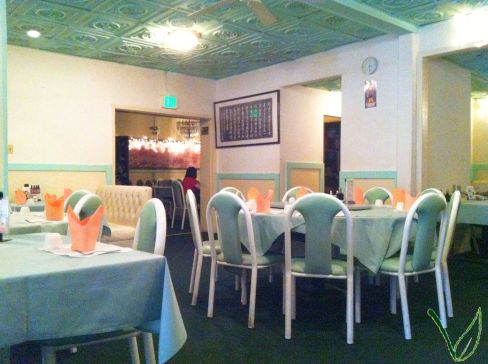 My mom and I ordered Pan Fried Vegetable Dumplings to start off. 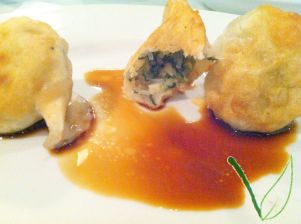 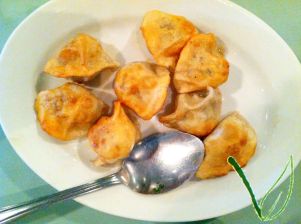 They were really, really good – all warm and crispy.  I would definitely order these again.

We also shared the Mu Shu Vegetable, which is always a favorite of ours. 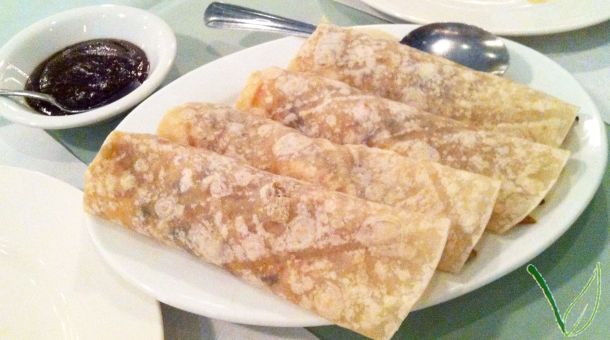 The waitress very cutely called these “Chinese burritos” and encouraged us to ask for those if we forgot what they were actually called.

For our entrees, we ordered Lemon Veggie Chicken… 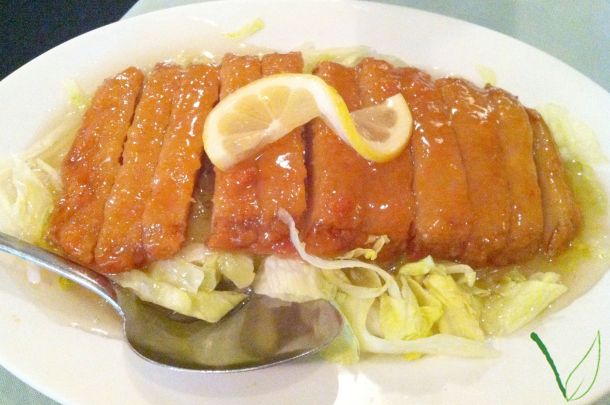 And Veggie Chicken with Cashew Nuts. 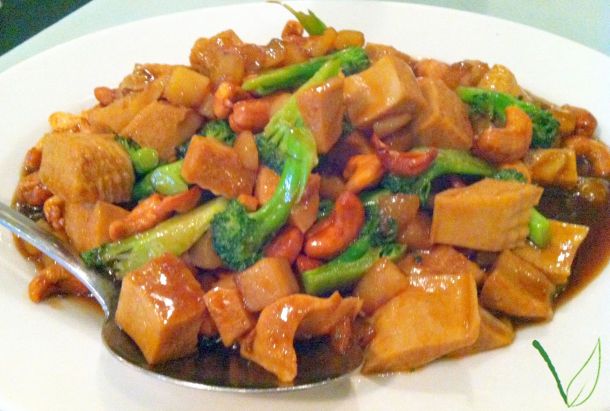 I’m not usually a fan of fruit sauces (orange or lemon, usually) on savory meals, but the lemon chicken tasted good for what it was.  I love cashew nuts and veggies, and the Veggie Chicken with Cashew Nuts was delicious.

Although we didn’t try any, they offer a ton of vegan desserts.  They have a flip menu listing ingredients including things like organic rolled oat flour .

I really like this place.  They have a lot to choose from and never rush you.  The whole family likes it, so we will definitely be back.

I am a big fan of Isa Chandra Moskowitz’s cookbooks… her Fronch toast recipe is the best French toast I’ve ever had.  So when I felt like trying my hand at a vegan chocolate chip recipe, I went directly to her website for a recipe.

These cookies are actually quite simple to make and come out very soft and puffy rather than other cookie recipes that come out crispy and flat.  They were very tasty as well – try them out! 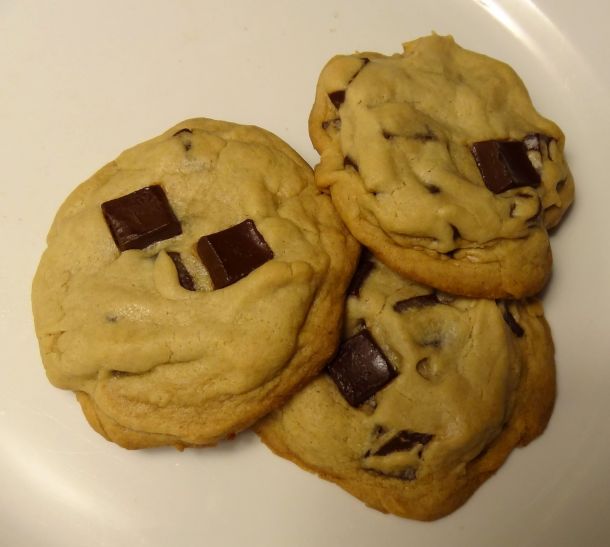 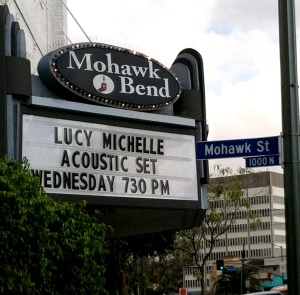 Mohawk Bend is a place that I have wanted to visit for quite a while.  In fact, I sought out a copycat recipe for their Buffalo-Style Cauliflower because people raved about it.  Here’s where I tweaked that recipe a bit and posted about my results.

Eric and I went out with his mom a couple of weeks ago and suggested Mohawk Bend since it’s mere miles from her house.  As I said in my previous post, Mohawk Bend (found in the Echo Park area where Mohawk Street bends and meets Sunset) used to be a movie theater, but was left vacant for many years.  Now it has a cozy, pub-like atmosphere and offers food and drinks that are made mostly with California-based products. 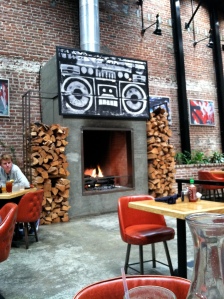 We were seated in the back, theater area that is surprisingly light and airy.  On the walls hang photos of graffiti saved from the renovation of the formerly dilapidated theater.  Their well-marked menu has quite a bit to offer to vegans, vegetarians, and carnists alike, so it took us a while to figure out what to order.  I knew what I wanted to start with, though!  I got a Mimosa with cider rather than champagne that was seriously yummy.

Of course, we had to order their Buffalo-style Cauliflower appetizer.  While very tasty, I preferred my version.  Theirs didn’t have a lot of coating to it and therefore, the cauliflower wasn’t as soft and just looked like slightly crunchy cauliflower drenched in buffalo sauce.  I can see why the original copycat recipe didn’t call for much batter, though.  It was actually a better copycat recipe than I had assumed. 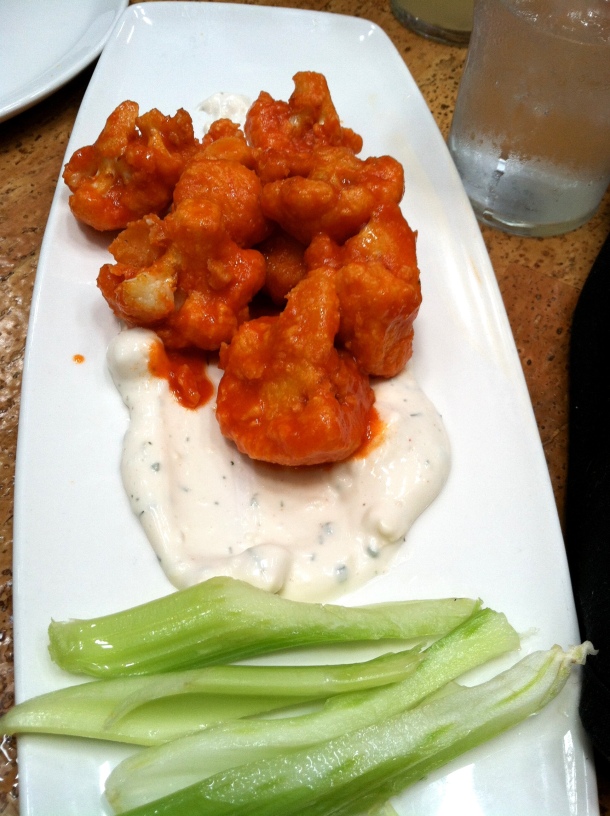 For my entree, I ordered their Vegan Burger with vegan cheese, which was delicious!  Possibly the best vegan burger I’ve had.  The black beans and rice patty had just the right texture to it and the cheese was such a welcome addition.  The fries that came with it were well-cooked, but a little too salty. 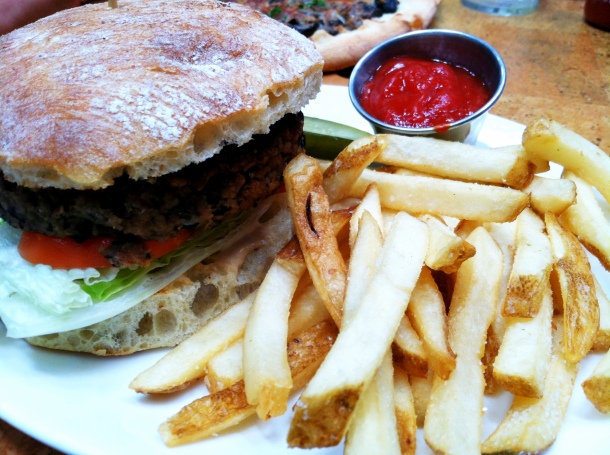 Check out that side view!  It’s making me hungry! 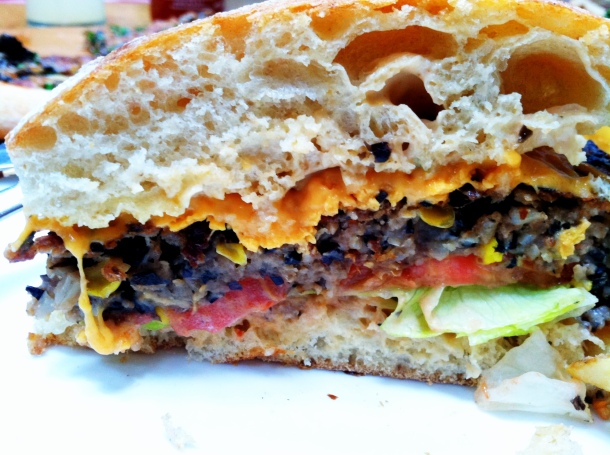 Finally, I had to try out one of their vegan desserts.  I ordered the vegan Cast Iron Cookie, which was Mohawk Bend’s version of a BJ’s Pizookie.  It was good, but a little overcooked and lacking in chocolate chips.  I could have done without it. 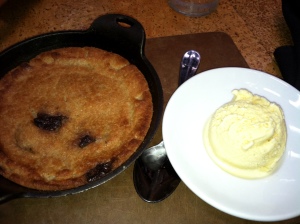 We will definitely be going back, but this was quite a pricy trip.  For the three of us, it cost over $100.  Eric’s mom graciously covered the meal, but I felt a little guilty.  I highly recommend the place to anyone in the LA area.  It’s worth going out of your way for.

I promised a brownie recipe and I am here to deliver!  This recipe (originally found here) is relatively simple and is made mostly with regularly stocked pantry ingredients.  I added a melted chocolate topping to the brownies because that is how my mom has made them since I was a child and her brownies are loved by everyone who is lucky enough to try them.  They were yummy and gooey and certainly curbed my chocolate cravings.  My only complaint is that they were pretty crumbly and definitely needed something to get them to stick together.  I have added an egg replacer to the recipe below.  You could easily use different types of sugar and flour to make this sinful recipe a bit healthier. 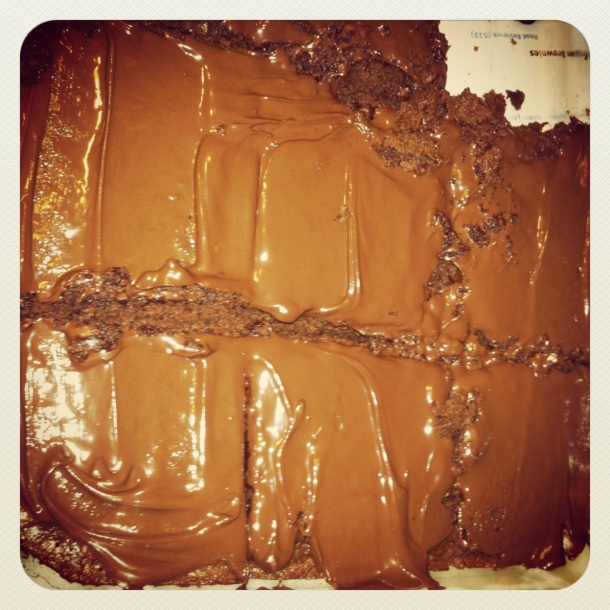