Vegan at The Counter

I have been to The Counter, a burger chain restaurant in the past, but it was before I went vegan.  Early in my vegan days, I did some online searching and found that their veggie burger patty wasn’t vegan (I believe it had egg in it), so I didn’t think about going back until I heard recently that they now offer a Vegan Veggie patty.

Eric and I were out shopping and passed a location of The Counter, so we stopped in on a whim to try it again.  I tried to quickly look up if any of the buns were vegan, but their website isn’t very mobile-friendly.  I asked the waitress and was told that none of the buns were vegan.  I was initially really irritated.  What is the point of having a vegan patty if you don’t offer any vegan buns?  Buns don’t need animal products.  I just don’t get it.  They’ll be getting an email from me about that.

UPDATE:  The always knowledgeable Insufferable Vegan has since let me know that the ciabatta buns are vegan.  The CEO of The Counter has confirmed it.  I knew I had seen this information somewhere, but we just stopped in on a whim, so I didn’t have time to check into it in advance.  Good move, The Counter, offering a fully vegan burger option!  However, I have to say that my husband has told people since our visit that you just get so much more food when ordering it in a bowl and I have to agree that it was pretty great that way.

I opted to have my vegan burger in a bowl (this costs an extra $1 – what the hell, The Counter?!) with organic mixed greens, tomatoes, roasted corn and black bean salsa, roasted green chiles, roasted red peppers, and housemade guacamole (a premium topping for $1.25 extra) with Sweet BBQ sauce.  I ended up with a sorta Tex-Mex BBQ salad.  Scroll all the way to the bottom of the post for a list of all vegan options. 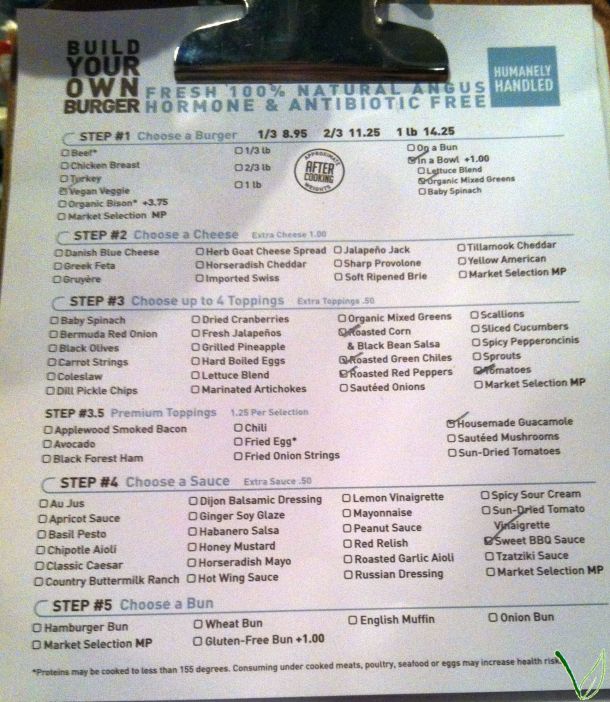 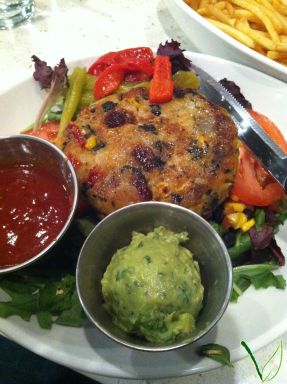 It was actually very tasty and extremely filling.  The patty was warm and had visible pieces of veggies in it.  You can see what looks like spinach, red pepper, carrots, black beans, and corn in the second photo.  The patty was really hearty and immensely preferable to the microwaved veggie patties at Red Robin.

Eric and I ordered large fries to share, which turned out to be way too much.  They were shoestring cut and I commented that they were well cooked, since shoestring fries tend to be floppy or burned.  Eric said that it’s because they are twice-fried.

The burger in a bowl option is really tasty and I look forward to trying their ciabatta bun on a future visit!

FYI:  the allergens are listed on their website, and the following items are marked as vegan.

*Marinated Artichokes is oddly listed as not vegan, but it doesn’t say what’s in it.  It might be worth clarifying with the staff if you’re interested.