For many years, my youngest sister, Allison was the only vegan in the family.  However, for the last two years, we have been lucky enough to celebrate cruelty-free as a family.  I thought I would share our recipes for a tasty, cruelty-free Thanksgiving.

This is a very simple stuffing recipe, with a little interesting addition of quinoa.  I love stuffing this way, with a little vegan gravy.  Some people may be interested in making a from-scratch stuffing (it’s certainly healthier that way), but as you may know, I’m more of a semi-homemade cook.  My mom also made a drier, from scratch stuffing for those in our family who prefer it that way.

We are going to make the quinoa first.  I think the instructions found here make the best quinoa, I have just made a couple of changes below, based on what I did. 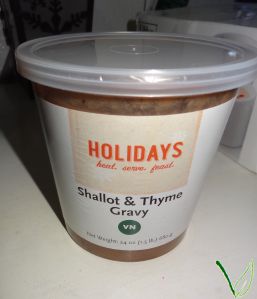 I have never made gravy myself and didn’t want to attempt it this year.  I got a 24 ounce tub of Shallot & Thyme vegan gravy at Whole Foods for $5.99 and felt it was worth it to not have to make it myself.  It tasted great, but if you are interested in making your own, this recipe from Our Veggie Kitchen looks good and relatively easy.

This recipe can be found in The Vegan Slow Cooker by Kathy Hester.  It is made in a slow cooker, making it great for multi-tasking in the kitchen, but I also found it helpful to have something that could be warmed up and served in a slow cooker rather than on the crowded range or in the oven once we got to my parents’ house.

My only complaint was that the risotto came out a bit bland.  I think some more (and fresh!) seasoning would have helped.

Add the water, rice, squash, nutritional yeast, thyme, sage, and rosemary to the slow cooker.  Cook on high for 1 1/2 to 2 1/2 hours (I cooked for 2 hours, checked it, then added half an hour), until the rice is cooked through but still al dente.  Stir every 20 to 30 minutes, adding extra water if needed.  Season with salt and pepper and taste and adjust the herbs.  This makes 6 servings, so I doubled it to make plenty for Thanksgiving.

This is pretty self-explanatory, but Pillsbury Crescent rolls are vegan, so I just made a batch of those. 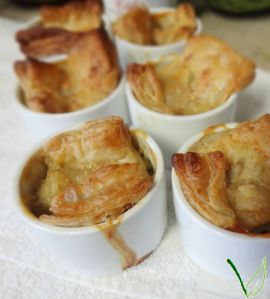 My mom made mini pot pies using Beyond Meat chicken-free strips, Victoria Vegan alfredo sauce, puff pastry, and fresh veggies typically found in pot pies.  They were really cute and tasted great.  However, I always feel like Beyond Meat strips are huge, so they probably would have been better had she cut those smaller or removed them altogether, because the pot pies would have tasted great, even without meat replacement! 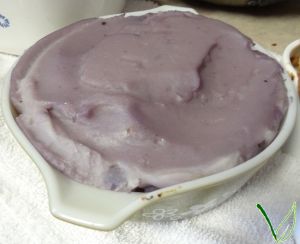 Rather than the same old, predictable mashed potatoes, just veganized, my sister Samantha made purple mashed potatoes!  It certainly helps the overwhelmingly brownish/beige plate trend that you usually see at Thanksgiving.  There’s no specific recipe that she follows, but here are the general directions.

Wash and peel purple potatoes.  Boil until fork tender, then process in food processor until creamy.  Add salt and pepper to taste.

In an effort to have a dinner full of variety, Samantha also mashed parsnips.  Again, no real recipe here, but general directions are below.

Wash and peel parsnips.  Boil until fork tender.  Roast fennel and garlic, then place in food processor with parsnips.  Process until creamy, then add some dill, black pepper, and sea salt. 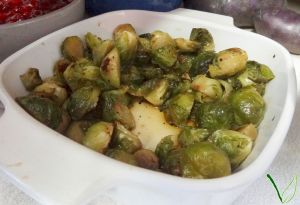 Samantha introduced me to brussels sprouts this year!  They were pretty good actually, I thought they had a flavor like broccoli.  I’m already thinking that a balsamic vinaigrette brussels sprout dish would be great.

Wash sprouts and remove any loose or wilted leaves.  Cut them in half and toss in olive oil and salt and pepper.  Roast at 375 degrees for about 20 minutes.  Remove from oven, then toss in maple syrup and roast in the oven for another 10 minutes.

Allison used this recipe from Isa Chandra Moskowitz’s Post Punk Kitchen.  It was very flavorful and was a nice, little addition to the meal, again, adding variety.

Allison made this special version of cranberry sauce.

Give these and other cruelty-free recipes a try this Thanksgiving!  The animals and your guests will thank you!