While up in the Bay Area for the Great Dickens Christmas Fair, we planned to spend some time with our close friends, Randi and Ethan.  I’ve known Randi since we were in preschool together, so it’s been over 25 years!  Visiting with her parents and siblings feels like spending time with aunts, uncles, and cousins.  We don’t see each other too often because of the distance, but it’s great catching up… it always feels like no time has passed at all.

Anyway, Randi was excited to take us to Ike’s Love & Sandwiches in Walnut Creek since they have a variety of both omnivore and vegan sandwiches.  In fact, the menu says “Most of our 100 veggie sandwiches can be made vegan, so just ask!!”  The menu only listed 12 veggie sandwiches, but their website describes many more.  It would probably be a good idea to check out the website in advance of you visit so that you have more to choose from. 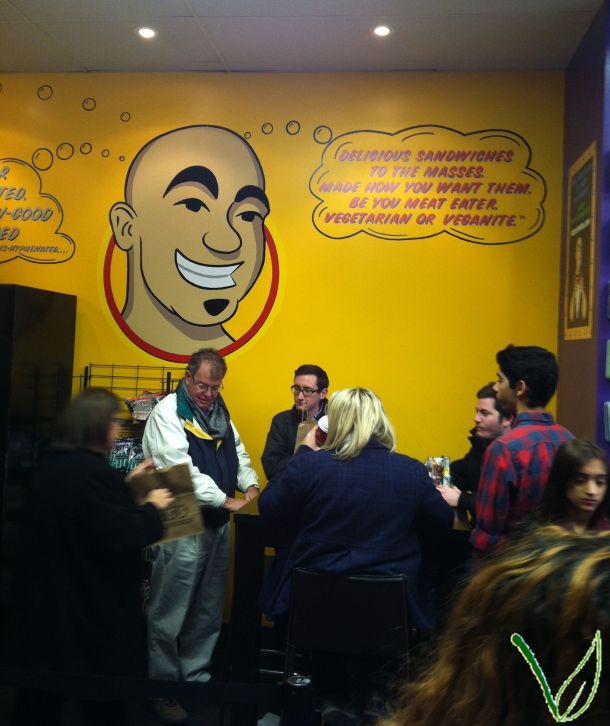 I initially asked for the Meatless Mike: vegan meatballs, marinara, and (vegan) pepper jack, but the cashier told me that they didn’t have any vegan meatballs because their local Trader Joe’s stopped selling them.  Instead, I ordered the Pilgrim on sourdough: vegan turkey, cranberry sauce, sriracha, and Havarti.  I asked if they just left off the cheese to make it vegan or if they had a vegan cheese; the cashier said that they use vegan cheese.  I wasn’t clear on whether it was a vegan Havarti or just some all-purpose vegan mozzarella or something.  I wouldn’t know the difference by taste because I don’t believe I ever tried Havarti before going vegan.  I asked for lettuce and tomato and I detected a little vegenaise in the sandwich upon unwrapping it.

I never would have thought to combine cranberry sauce and sriracha, but they were delicious together.  It was the messiest sandwich ever and I went through a ton of napkins.  I thought it was a creative and yummy sandwich, I just feel conflicted about one thing.  I’m pretty sure the vegan turkey was Tofurky brand and they use Trader Joe’s meatless meatballs for other sandwiches.  I just hate paying for what I can make myself.  On the other hand, I am grateful that restaurants are starting to purchase store bought supplies so that they can easily offer vegan options.  I will gladly stop by whenever we are in the area and in the meantime, Eric pointed out that I can use their menu as inspiration for original vegan sandwiches at home!

On a side note, Randi’s mom is interested in making her diet a more plant-based one and she may read this -> Hi Pam!