My sister, Alli, has talked about Farm Sanctuary’s Animal Acres in Acton since she first visited a couple of years ago. After deciding to pursue a vegan lifestyle, I asked Alli to join me on a trip to the farm. Their website describes Animal Acres as “a Los Angeles farmed animal sanctuary and compassionate learning center dedicated to rescuing and protecting farmed animals through rescue, education, and advocacy efforts.” They offer “meet and greet” tours at 11am, 1pm, and 3pm every Sunday. Our knowledgeable tour guide, Cameron, introduced us to several animals, answered our many questions, and gave us quite a bit of information.

First, we visited the pigs. Pigs are actually very social and will cuddle like this, even in high temperatures. They look like they are smiling when they’re sleeping and they love having their bellies rubbed. Cameron explained that they are also very smart. Their intelligence level is roughly equivalent to that of four year old humans and they have been known figure out how to unlatch the gates around the farm.

The cows were also very sweet and friendly. They seemed to like all the attention from our group. This one kept licking Alli’s hand. 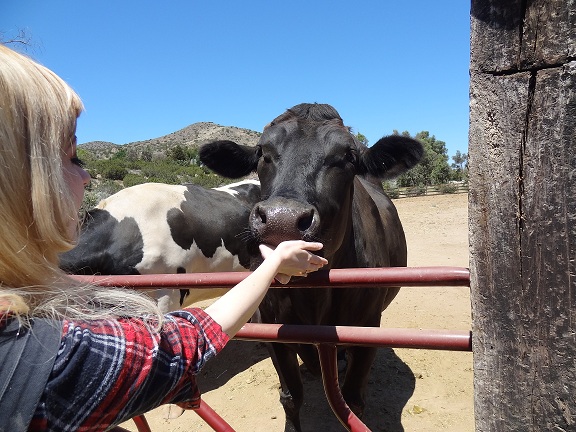 The goats were sweet and outgoing. This little guy, Prince, kept lightly nuzzling his head against people, similar to what my cats, Noche and Vito, do all the time.

Last, we went to see the birds in the courtyard. This poor turkey was so overweight that he walked like it was a real struggle for him. This chicken, contrary to his appearance, is only 6-8 weeks old. When people stroked his feathers, he closed his eyes as if he really enjoyed it.

After our tour, we visited the gift shop where I picked up a lot of literature on vegan recipes, restaurants, and information about the animal products industries. It was an eye-opening visit and I’m sure we will be back again.

After our trip to the farm, we drove all the way to Doomie’s Home Cookin’ in Los Angeles. My husband, Eric, is a lover of hearty, meaty food. If he were ever willing to try a vegan restaurant, this is the place I would take him to. I ordered the “Chicken Parmesan” sandwich, which was delicious. The chicken replacement was nearly perfect; the only real observable difference between it and real chicken was the texture of the skin. Had I not known that it was a vegan sandwich, I would have just assumed that the chicken was over cooked. Alli had the vegan buffalo wings, which tasted pretty great, again, just with a tougher “skin” than animal meat. Finally, we took a brownie to go which was huge and tasty. We shared it with our dad, who also really enjoyed it. Pictures of the food below. We will definitely go back again!

I blog to document my experience transitioning to a vegan lifestyle.
View all posts by mrsnikkiv »
← Days One and Two
Dual Dining – Chinese Salad →